In 2020, the COVID-19 crisis had a high impact on the daily life of people all over the world. That is particularly true for patients with a chronic disease who must go to their hospital for regular follow-up visits. Inflammatory Bowel Disease (IBD) patients are no exception here. In order to face this extraordinary situation, IBD centers had to change their organization to meet with the obligation of social distancing and lockdown in some countries.

This is especially true for one of the most impacted European country, the UK. A vast majority of IBD centers in the UK started to use home monitoring tools during the pandemic, including IBDoc®, as a mean to safely test fecal calprotectin. Our distributor in the UK, Alpha Laboratories, highlighted this switch to digital health in their latest issue of their journal called “Perspective”. In this article, they reported why and how the Mid and South Essex University Hospital Trust started to use IBDoc® routinely within less than a year. The gastroenterology department introduced IBDoc® with a small pilot in Summer 2020 to check patient acceptance and the correlation to an ELISA laboratory test. After confirmation that the tool was highly appreciated by patients and comparison studies to ELISA were completed, the team rolled out the pilot from 20 to 110 patients in a few months. As we can read from the numerous interviews in this article, from Healthcare Professionals (HCP) and patients, this implementation in Essex was a complete success: Patients are considering the test easy-to-use and feel that they are gaining control over their chronic condition. On the HCP side, nurses and doctors see that the patients are more involved in their disease management, which ultimately leads to less work and less cost to the Hospital as HCPs can focus resources on patients who have immediate need for direct contact and support.

In addition, the Hospital wanted to make sure that IBDoc® continuously meets the quality requirements for lab tests by enrolling it in a NEQAS Ring Scheme (EQA). This participation ensures that IBDoc® is constantly monitored just like a lab test. 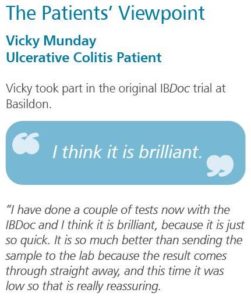 This switch towards digital health was true for most IBD centers in the world. With the pandemic, the goal was to adapt and only accept patients for emergencies such as unavoidable endoscopies and surgery. In order to stay in contact with the rest of the patients, IBD centers enhanced their capabilities in telemedicine. Lees et al., 2020 (1) conducted a global survey to assess the shift from face-to-face meetings to telemedicine, before, during and after the pandemic. Using Google Forms, the study sent out a questionnaire via Twitter, LinkedIn and emails on April 20th 2020 for a period of 10 days. 802 answers were obtained, mostly by gastroenterologists (82,4%), IBD nurses (10,2%) and surgeons, dietitians and psychologists (7.5%) from 56 countries, mostly from the UK (90), the US (86), Italy (85) and Brazil (44).

The results from this questionnaire clearly showed that the COVID-19 crisis created a change from nearly 100% face-to-face to phone or video consultations. Interestingly enough it seems that the impact will last beyond this extraordinary period, as the IBD centers intend to keep using telemedicine tools even after the crisis will be over (Figure 1).

Figure 1: Survey answer to evaluate what tools will use the IBD centers once the COVID-19 crisis is over (746 answers; reference 2).

But for most of the centers, telemedicine so far only means consultations over the phone or by video. A vast majority of the centers do not use an app to monitor Patient Reported Outcome (PRO) and to communicate with patients. Only about 50 participants reported using such a solution for most of their patients and about 100 reported using it for some of their patients. The rest reported no use of such tools but a majority (slightly more than 500 participants) reported they wanted to assess the use of such tools.

For fecal calprotectin (fCAL) testing, 89% of the responders had a routine access to it prior to COVID-19 but only 54% managed to keep this access during the pandemic. The others had either a reduction in capacity (33.7%) or experienced a complete shutdown of activities (12,3%). For obvious reasons, home calprotectin tests were highlighted during this crisis as they allowed patients to stay at home while being monitored remotely. The study team surveilled the use of such tools (Figure 2). Out of 746 participants, around150 participants reported using it for their patients (2). Thereby, IBDoc® was the most used tool (53,3%) followed by CalproSmart (39,3%).

This paper highlights the need of the IBD community for digital tools. Indeed, around 420 out of 802 answers reported the wish to use those tools regularly. Of note, there is no home monitoring tool approved by FDA. 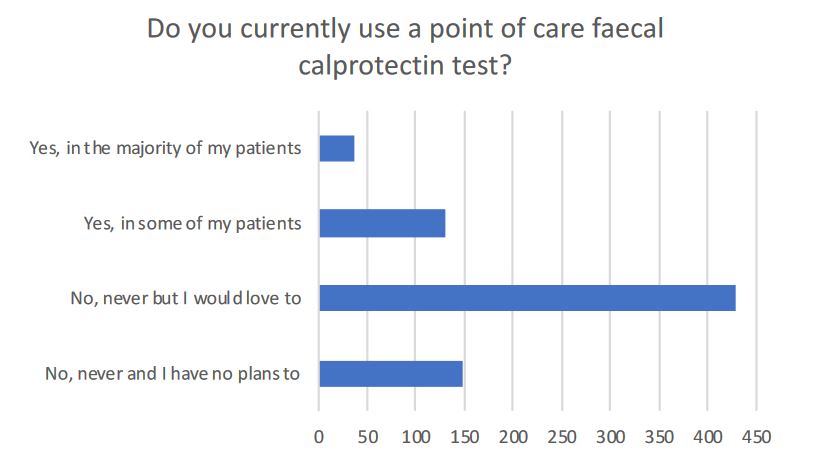 Following the same idea, a similar survey was performed specifically in the UK by Kennedy et al., 2020 (3). Again, the survey was trying to evaluate the challenges that IBD centers met during the pandemic and how they adapted to face them. Using Google Forms, they collected answers from the 8th to the 14th of April 2020. The study team tried to assess the staffing resources in the services, the changes that were made to answer the pandemic challenge and the long-term impact. During the week the survey was active, 147 answers were collected representing 70% of IBD services in the UK. As the UK saw high infection numbers during the 1st wave, it made sense to evaluate the specificities of this country to see if the impact on the telemedicine shift was higher than in other countries.

The answers were comparable to the global survey: most clinics switched face-to-face appointments to telephone consultations (86%) or to video consultations (11%). Of note, 6% of clinics used apps to follow their patients before the pandemic and 14% were in the set-up phase at the time of the survey. On the same subject, most clinics (94%) observed an increased activity with their IBD service line which made them adapt to the increasing demand by allocating resources.

Regarding fCAL testing, one out of four clinics reported a complete stop of the activity and one out of three reported a reduced activity (Figure 3). However, 5% (6/120) of the services reported an implementation of a point-of-care tool such as IBDoc® and 2% (3/120) reported a scale-up of this service. The survey was done approximatively one month after the lockdown in the UK, so the numbers represent a trend towards the increased use of telemedicine.

Figure 3: Map of the IBD centers in the UK with their access to a fecal calprotectin test.